Gold Award recipients recognize the power of being a Girl Scout.

Girl Scouts of Nassau County Salutes Our Community Partners
GSNC has hundreds of community partners, including every public school district, most private and religious schools, local colleges and universities, other not-for-profit organizations, as well as government and corporate supporters and many small businesses. This is the second in a series of articles that will focus on some of our partner organizations.
DHL, Operation Cookie and a Commitment to Community 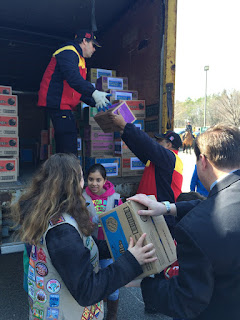 For more than a decade, DHL has partnered with the Girl Scouts of Nassau County to ship 600,000 boxes of Girl Scout Cookies—that adds up to literally ten million cookies!— to service men and women across the world through Operation Cookie.
A worldwide leader in shipping and logistics, DHL has made social responsibility a key piece of its strategy. By leveraging its core competency—international shipping—DHL makes an impact across the globe by connecting people and coordinating the smooth delivery of innumerable products across air, land and sea.
From species-survival programs (delicately shipping endangered species to new homes for their protection) to sending a taste of home (like cookies!) to troops stationed in the Middle East during Girl Scout Cookie Season. DHL has made itself a pillar of the community and an indispensable resource for organizations such as the Girl Scouts.
While this partnership, at the center of Operation Cookie, began 11 years ago, DHL began its own Operation Holiday Cheer one year prior. Sending Christmas trees, menorahs and holiday decorations to troops stationed overseas, Operation Holiday Cheer has been an annual community event for 12 years, most recently celebrated on December 7, 2015.
But it was Connie W., a GSNC volunteer from Manhasset, who lit the spark that brought the two organizations together for something special. Connie and her family had been shipping hundreds of boxes of cookies directly to troops out of her garage. When a friend made the connection between DHL’s commitment to community involvement and GSNC’s desire to send cookies around the world, all it took was one question to make it all happen: Can we do this?
The answer has been a resounding yes! 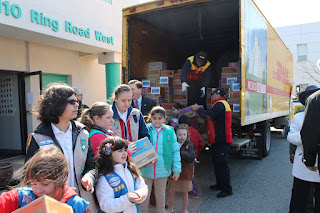 From Iraq, Afghanistan, Bahrain and Kuwait to Germany, South Korea and everywhere in between, the program has grown exponentially and organically. Individual Girl Scouts mentioned that their own family and friends are stationed outside the Middle East, and the program responded accordingly. With DHL’s logistical ability it was second nature to grow the program and bring a fresh box of Do-si-dos or Thin Mints to troops at military hospitals such as the Landstuhl Regional Medical Center in Kaiserslautern, Germany and troops stationed around the world.
And that social responsibility continues to get paid forward. The late Lt. Col. Schumacher had asked if he could share his Girl Scout cookies with the children in Iraqi villages his troops encountered every day. While the troops were thousands of miles away from home, sharing a taste of their childhood with a smiling face helped bring together two cultures in a truly special way. That genuine respect, love and appreciation is what Operation Cookie is all about.
Posted by Donna Ceravolo at 5:00 AM No comments: 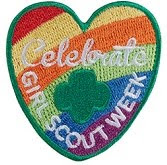 Girl Scout Week is celebrated each March. It starts with Girl Scout Sunday and ends with Girl Scout Sabbath on a Saturday. It always includes the Girl Scout Birthday, March 12th, the day in 1912 when Juliette Gordon Low officially registered the first 18 girl members in Savannah, Georgia.


Don’t let the week pass without earning your Girl Scout Week patch and learning so much more along the way!


Let's Celebrate! All Day! All Week!

Every day on social media, Girl Scouts are showcasing amazing Take Action projects, exciting Troop adventures and memorable Girl Scout moments. Are you one of those Girl Scouts? Next time you post, try including a Girl Scout hashtag(#) in your post so you can be part of the bigger Girl Scout conversation.


#GirlScoutsGiveBack – use when posting pictures or talking about your Girl Scouts giving back to the community through community service projects or Take Action Projects.


#GirlScoutsRock – use when posting pictures or talking about Girl Scouts Awesomeness… anything that involves fun, friends and making a difference, this is the hashtag to use.


#GirlScoutsForever - use when posting pictures or talking about your Girl Scout sisters and the memories you’ve made.


#BlingyourBooth – Is your Troop taking part in the Bling Your Booth contest? Be sure to use this hashtag to show others what your Blinged-out Cookie Booth looks like.
#CookieBoss - Showcase your Girl Scout learning the #5skills, selling Girl Scout Cookies and being an all around #CookieBoss with the #CookieBoss hashtag.
Posted by Donna Ceravolo at 6:00 AM No comments:

Girl Scouts and Non-Girl Scouts alike can join in on the fun and festivities on National Girl Scout Cookie Day! Girl Scouts can celebrate with us by hosting a Cookie Booth Sale, a Cookie Walkabout, or simply going door-to-door that day with your Girl Scout Cookie Order Form. Not a Girl Scout, well you can still participate in the day’s festivities. When Girl Scouts sell Girl Scout Cookies®, they are building practical life skills such as Goal Setting, Decision Making, Money Management, People Skills and Business Ethics… skills that will help them be successful in life and become the leaders of tomorrow!

Posted by Donna Ceravolo at 4:54 PM No comments: 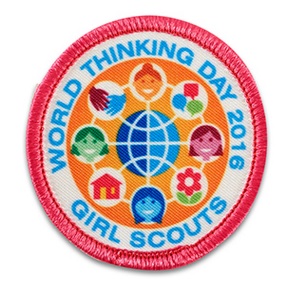 Posted by Donna Ceravolo at 4:39 PM No comments: