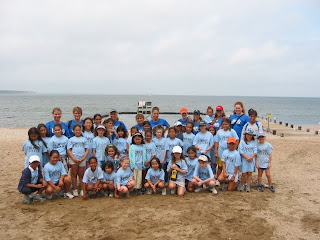 Summertime, summertime...finally, we’ve reached the point in the year where we can kick back and relax. Think summer breezes at the shore, gardens blooming, and the coolness of a shaded trail. As life slows down, for the rest of us, the Girl Scouts of Nassau County are busy with summertime activities! We hope you’ll join us for some summertime fun...

Girl Scout Daisies can make sun prints and use magnifying glasses to investigate nature at our Lazy Daisy Days of Summer program in late July. Bats are back in our area, you can see them in the evening as they snatch mosquitoes from the air. At Tackapausha Preserve, Brownies will earn Go Batty! and hear why these creatures are so important to our environment. Juniors will earn Your Outdoor Surroundings when they visit with us at Sagamore Hill following in the environmental footsteps of our 26th President, Theodore Roosevelt. Seniors and Ambassadors can participate in our Fire Island Adventure as you canoe with us off the shores of the Watch Hill Salt Marshes while earning Paddle, Pole and Roll. You’ll see nature at its best in this environment.

If you need a break from the sun, Juniors and Cadettes can hear tips about skin care from specialists at Clinique. Or Juniors can also get prepared to babysit while earning Caring for Children. In early July, Cadettes, Seniors and Ambassadors can come to What’s Your Tolerance Level? to build effective tools to challenge bullying and prejudice in your schools and communities.

In August, Brownies can build and fly kites and Juniors can use their creativity exploring art in nature in beautiful garden settings. Summertime and baseball go hand in hand and all Girl Scouts and their families can come to cheer for the Long Island Ducks at Citibank Park.

It’s not too late to come to camp. Join us at either of our day camps in Cantiague or Wantagh or at sleepaway camp at Blue Bay. You’ll experience the great outdoors and traditional activities tied to theme weeks.

Please check the Girl Scouts of Nassau County website under Program Spotlight or Register for Program for registration information. If you need more information about programs, email Pat Paluszek at paluszekp@gsnc.org . We hope we’ll see you this summer at one of these programs!

Posted by Donna Ceravolo at 10:02 AM No comments: 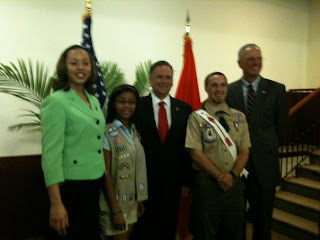 It's Award Season in Girl Scouts...Patches and pins are being awarded and the metallic theme of Bronze, Silver and Gold abounds. Each community has their own way of celebrating the girls' accomplishments. Some have them walk across wooden bridges; others have tea parties or large community gatherings. Some invite politicians and others invite only family members. Each celebration is special and will be remembered by the girls. One special ceremony for our girls is the Gold Award and Eagle Scout recognition ceremony by the County Executive.

This annual event is a way for County Executive Edward Mangano to recognize these Scouts for earning the highest recognition in their Scouting organization. He also is recognizing the value of their service to Nassau County. Yesterday, Mr. Mangano took time out of his busy schedule to greet these young men and women; he commemorated their accomplishment with an official citation and picture. This is the part the parents love! 210 boys earned their Eagle Scout rank while 66 girls earned their Gold Award this year. Why is there such a difference in the numbers? Maybe the answer lies in the way our award is earned.

At this year's ceremony, the Boy Scout speaker, James Fisher commented about the amount of work it takes to earn the Gold Award. He was astonished by the fact that our girls have to do work on their project alone, put in so many hours, usually tackle issues that impact a broader base of the community, and the effect of their project must be sustainable. These feature alone can make the attempt overwhelming, but those girls who earn their Gold Award are truly unique and should be praised.

There's still time to donate to Operation Cookie. Send a case or box of Cookies to our military troops overseas and remind them that we're thinking of them. To provide a taste of home simply visit www.gsnc.org and look for the Operation Cookie logo! In the meantime, here are a few videos we recently took regarding Operation Cookie!

Posted by Donna Ceravolo at 1:57 PM No comments: