Building Robots (and Confidence, too!) by Guest Blogger James Langan with Patty Donohue-Brown 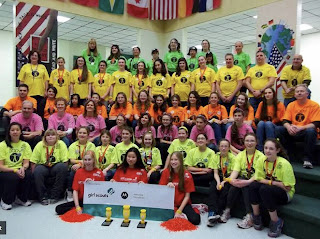 The proliferation of technology in the last several decades has left in its wake a plethora of gadgets – some useful, some not – and has induced among the citizenry some curious habits that would have left previous generations scratching their heads.  More than a few of us have purchased cell phones and faithfully lug them along in our travels so that we might “stay connected,” but then turn them off so we don’t drown in a deluge of unwanted calls.  Others may claim cell phones are only for emergencies; but if true, we should also be carrying around defibrillators, fire extinguishers, Tibetan-English phrase books, and C-Rations.  After all, you never know.

But technology is not just for yakking and hacking.  In fact, the Girl Scouts of Nassau County’s STEM (Science, Technology, Engineering and Math) programs use technology as one of its chief means to build girls of courage, confidence, and character.  Our FIRST LEGO League (FLL) Robotics Program, for example, allows teams of Girl Scouts from grades four through eight to work with LEGO-based robots, develop and present research projects, and compete in FLL Tournaments.  One FLL team, Merrick Masters, created an adaptive tennis racket for tennis players with a weak grip and received a grant to continue its development.

Our FIRST TECH Challenge (FTC) program, which is for high school students, allows girls working in teams to design, build, and program highly sophisticated robots and compete in FTC Tournaments.  Both the FLL and the FTC programs challenge girls in real-world science and technology – allowing them to develop strategies for building robots based on sound engineering principles.   The FTC team, ICEBREAKERS, built a robot designed to successfully get over hurdles in a daunting obstacle course.

At both FLL and FTC Tournaments, girls receive awards for competition, community outreach, robotic design, and other fun stuff. The Girl Scouts of Nassau County now has five FLL teams and one FTC team— and each of these teams has won awards this season.  Not wanting to rest on its laurels, the ICEBREAKERS will be competing at the FIRST WORLD CHAMPIONSHIP in St. Louis, Missouri in April!

Awards are nice, but our Robotics program also provides other, more subtle benefits:  Besides helping to cast aside damaging stereotypes about girls’ ability in science and math, it also breeds confidence and awakens girls to their true potential – allowing them to develop valuable life skills and discover exciting new career opportunities.

In a local restaurant, a group of girls once explained to a waiter, who had asked about their Lego team T- shirts, that they had just come from a LEGO robotics tournament.  He was really impressed and said, “Wow, you all must be very smart.”  The girls beamed.  Maybe nobody had ever told them that before; and maybe, after that simple act of validation, they could see themselves in a new light for the first time.

Insight about one’s potential being key to its realization, the waiter’s gift was priceless.  And the beauty of our Robotics program is that it can provide that same insight to all girls – regardless of their economic background or current academic standing – so that they can truly make a difference in their own lives and the lives of others.  And it’s fun too!
Posted by Donna Ceravolo at 6:02 PM No comments:

And the winning proposition is…

The Task Group was broken into five separate teams that examined the needs of Girl Scouts’ CUSTOMERS [ the girls], our STAKEHOLDERS  [parents, volunteers, community organizations, etc.], our COMPETITORS, SECTOR TRENDS [what is happening in not-for-profit organizations, philanthropy, business, technology and the lives of girls and families that will impact how we operate Girl Scouts] and OUR OWN REALITIES/THE BRUTAL TRUTHS [those factors specific to GSNC  --numbers, dollars, demographics, assets].

Each team was given the task of answering specific questions, but teams had latitude in how they divided the work, whether they met face to face or electronically, and how they went about gathering their info.  (Our volunteers and families should remember receiving surveys back towards the end of January!)

On the weekend of February 12-13 the five teams all convened in person to report their findings. As each team reported, I could see heads around the room nodding in agreement, whispering to their neighbors and making notes, but by lunchtime it was obvious that certain themes were emerging. Families wanting more activities together, volunteers wanting more support, girls wanting to have fun and be part of an organization that is cool and relevant, mixed perceptions of what Girl Scouting really is from all of our stakeholders, the need to better use technology to keep up with girls and the world.

As I said, this is a Strategic Learning process and while I honestly do have great respect for process of all kinds, I do understand how and why process does work (hooray for grad school and the school of life). My family, colleagues and friends know that  am not very patient with most processes, I like to get the facts, cut to the chase and make a decision. If the decision doesn’t work, then try again. Pietersen’s Strategic Learning model really is a bit like that, we’ve done the first phase, we will move to the next steps, and all along the way we will monitor, adjust and realign … But for two days in February … and for a number of weeks leading up to then, I had to trust the process and I am so glad that I did!

After much work, our Strategic Learning Task Group identified that in order to continue to be a high functioning Girl Scout Council  (we have some great numbers when we measure ourselves against other Girl Scout Councils and other not-for-profit and youth serving agencies) we will need to shift our edge a bit to maintain our COMPETITIVE FOCUS.  There are many things we already do that make us a great choice for girls, families and the community that go into our WINNING PROPOSITION, and we were able to hone in on our KEY PRIORITIES.


My next edition will tell you more about the priorities and what our next steps will be in the Strategic Learning Process.  In the meantime, I’m going to try to remember to trust the process.

Posted by Donna Ceravolo at 4:09 PM No comments: