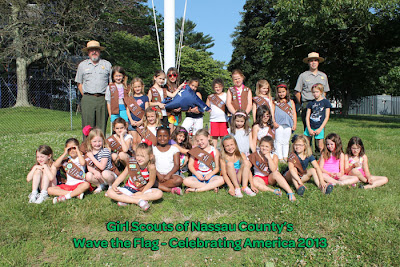 Girl Scout Brownies celebrated what makes America special at the Oyster Bay home of Theodore Roosevelt, 26th President of the United States at the Wave the Flag- Celebrating America program held on June 20th. They learned interesting facts about the American flag, walked in the footsteps of TR on a nature walk, learned why TR picked the Oyster Bay community to build a home and learned how to take care of the American flag. It was an exciting program filled with smiles.  Girl Scouts could be found climbing over fences and running around the vast property that was TR’s Sagamore Hill.

Posted by Donna Ceravolo at 3:00 PM