GSNC's Centennial Celebration Starts in:Countdown
Posted by Girl Scouts of Nassau County at 12:00 AM No comments:

Congratulations to all our Robotic Teams! 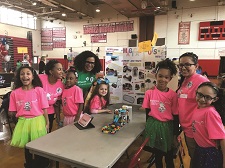 Thanks to our coaches and mentors, the Girl Scouts of Nassau County’s robotics teams had a fantastic year! We thank them all for their dedication and for the example they set for the girls.

Here are the results of our 2017 – 2018 season: FIRST® LEGO League Junior (Jr. FLL) 6-9 years old: The Magical Bots and The Sassy Hot Dogs attended the SBPLI’s FLL Jr. EXPO, where the girls showcased their LEGO robot design and research. The Magical Bots were awarded the OUTSTANDING TEAMWORK AWARD and The Sassy Hot Dogs were awarded the JOURNEY Award!

FIRST® LEGO League (FLL) 9-14 years old: Our five teams this season were the LEGO Lovelies, Smart Cookies, Soaring Rockettes, Tech Time Girls and The Dream Stream Robotics Team! The teams competed in the School Business Partnership of Long Island’s (SBPLI. Inc.) FLL Qualifying Tournaments, where they showcased their LEGO robot design, research and invention. During the course of the tournament, each team’s robot competed on the playing field. Then to a group of judges, the team presented their “problem” and the solution they invented to address their problem, and explained the engineering and coding process they went through to build and program their robots. The LEGO Lovelies were awarded the GRACIOUS
PROFESSIONALISM Award! This award recognizes a team whose members show each other and other teams respect at all times. They recognize that both friendly competition and mutual gain are possible, on and off the playing field.

FIRST® TECH Challenge (FTC) 9-12 grades: The Digital Darlings had an exciting season! They participated in two Qualifier Tournaments, they won the DESIGN Award at one and finished in second place overall at another. Their wins enabled them to move on to the championship tournament where they had a fantastic experience!

ALL of our teams worked hard and persevered! We congratulate them and thank them for representing Girl Scouts of Nassau County with courage, confidence and character and for showing everyone what a G.I.R.L. looks like! We are very proud of them all!

Would you like to know more about our STEM Robotics Program for your daughter or to coach a team? Please join us on June 5, 2018 at 7:00pm, here at the GSNC Service Center, 110 Ring Road West, Garden City, NY 11530. For additional information, please contact customercare@gsnc.org.
Posted by Girl Scouts of Nassau County at 1:31 PM No comments:

Ways to say "thank you" to your Girl Scout Volunteer?

One of the earliest behaviors my parents taught me was to say “please” and “thank you;” continuously reminding myself and my siblings that these were the magic words. After a birthday party, we would write thank you notes to those who came to celebrate with us. On Mother’s Day, Father’s Day, Grandparents’ Day, Teacher’s day, and all the other “days” of the year, we would say “thank you” to those who were there for us or supported us by giving cards and homemade gifts.

Here are a few ways you can say thank you:
Remember, it’s a fact: without our volunteers, we couldn’t and wouldn’t be the largest girls’ leadership development organization in the world. But we are.

So, THANK YOU!
Posted by Girl Scouts of Nassau County at 5:00 PM No comments: