Volunteers are what has made America great: They defend our freedom abroad; they provide disaster relief to cities and towns struck by earthquakes, tornados, floods, fires, and hurricanes; they feed the hungry, teach the illiterate to read, and help troubled minds to cope; they build houses for the poor and provide care for the elderly – and much more. Indispensable, each of these volunteers stands as an anonymous monument to the often abandoned truth that virtue is its own reward. Although it is impossible to count their selfless contributions, we can still say that the world would be vastly different – much colder, bleaker, and sadder – without them.  But they are here, and so we are blessed.

Faithful to this tradition, volunteers are also what make the Girl Scouts of Nassau County tick.  Be they Troop Leaders, Co-Leaders, Cookie Managers, Treasurers, Service Unit Members, Association Chairs, Registrars, and Board Members or any other indispensable type of volunteer, they are the prime mover that propels our organization forward as we strive to instill courage, confidence, and character in every girl that passes through our doors. Indeed, it is amazing that our volunteers manage to accomplish what they do while coping with the demands of parenthood and full time jobs.  And yet they do it gladly – because it is for the daughters of their community.

Unlike volunteers in emergency situations, Girl Scout volunteers may not see the fruits of their efforts right away: When a firefighter rescues a child from a burning building, the result is immediate; the firefighter’s heroism, obvious. But when a Troop Leader helps her girls to meet new challenges, learn new skills, and reach plateaus they otherwise wouldn’t have, it may take weeks, months, and even years to see the girls’ growth and progress. Much patience and faith are required, and the results are more subtle. Yet they are real. And a quiet and persistent heroism, though unseen by most, is still present. The Troop Leader’s efforts will eventually pay off in the success achieved by her girls in their daunting journey towards womanhood. Naturally, what holds true for the Troop Leader is equally true for every single Girl Scout volunteer.

For these reasons and many others, the Girl Scouts of Nassau County would like to offer a heartfelt thank-you to all our volunteers, past and present. Your commitment and dedication are the bedrock on which our organization is built. And for our many success stories, it is you who deserve the credit. You are the real reason the Girl Scouts of Nassau County truly does make a difference in the lives of girls we serve. Your contribution is invaluable and can only be matched by our enduring gratitude. Again, thank you for all your hard work and for making the world a better place for girls and for everybody.
Posted by Donna Ceravolo at 2:14 PM 1 comment:

Bully: Is it a movie for children? By Guest Blogger Eliza Zipper 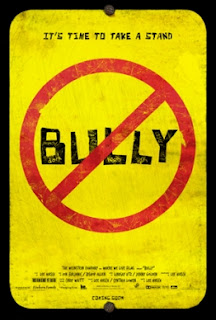 Bully is a call to action. The question is, who exactly is being called to action? The documentary, which was released on March 30th, follows the stories of five teens who are bullied and their families. It has gained a lot of media attention because its initial R rating would have prevented many children from seeing the movie. According to Lee Hirsch, the director and a native of Rockville Center, this would have prevented those who need it most from seeing the movie. The MPAA eventually repealed its decision and made the film a PG-13 rating. The edited PG-13 version of the film will be released on April 13th. So the question is, should you take your children to see it?

The movie is undeniably a must-see for parents, school staff, and anyone who interacts with children. As participants have learned through the Girl Scouts of Nassau County’s Critical Issues Initiative, people often make the false assumption that bullying only hurts the target. By showing the viewpoints of targets, reformed bullies, school officials, and parents, this film reminds us that everyone is hurt by bullying. The movie also gives examples of negative and positive responses to bullying from both children and adults. It reminds us that we all have the ability to turn cruelty into positive change.

Parents should keep this call to action in mind as well as the fact that the movie does not represent all of the voices impacted by bullying. Although girls’ stories are depicted, the type of bullying that is most common among girls is absent. This type of bullying, relational aggression, includes using relationships as a weapon through exclusion, spreading rumors, etc. The film also follows teens who live in the South and Mid-West and does not discuss how school responses and state laws differ across the country.

Parents should also know that although the film was originally rated R because of a few foul words in the background some of these have been edited out, it deals with some issues that may or may not be appropriate for your children, including  suicide, sexuality, and violence. The film tells the stories of teens who:
Given all of this, should you take your children to see the movie? Maybe.  You know your child and what she can handle best. Ask her about some of her own experiences with bullying. Keep in mind that she may not tell you everything, so research what happens in your community. Ask other parents and school officials about what they see with their children and school.  Combine this information with your knowledge of your child’s personality to determine what she has already been exposed to and how she will may react to some of these issues.  At the very least, have conversations with your child about bullying.

For more information about relational aggression and to see how Girl Scouts of Nassau County helps the community deal with it, go to www.gsnc.org/criticalissues.

Below are some helpful questions and definitions you can discuss with your children before and after the movie. These are designed for a basic level of understanding, but can be applied to any age. You may want to alter them depending on your child’s age and experiences.